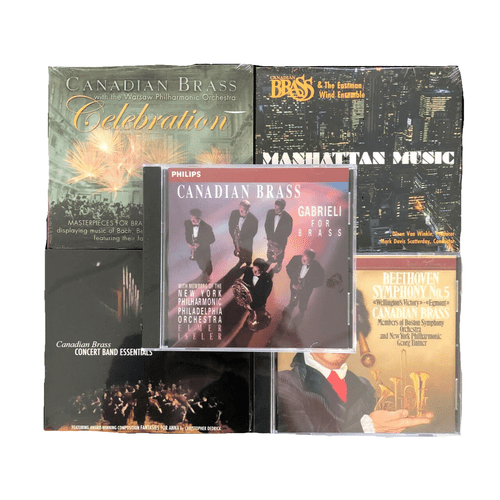 Over the years Canadian Brass has performed and recorded with the worlds most incredible ensembles.  This assortment of recordings represents a few of those collaborations.

CONCERT BAND ESSENTIALS - Band Tradition In past centuries virtually every North American city and small town had its own town band. It was natural for bands to become a feature of American public education, allowing millions of school children to experience the joy of wind band music and performance. The members of the Canadian Brass are inheritors of this band tradition, each having gotten his own start in school music programs. The Brass have of course retained their love of the wind band medium and under Chuck Daellenbach’s direction created a large repertoire of Wind Band music based on their best known brass compositions and arrangements. With the insightful help of the band division at Hal Leonard Music Publishing Corp. This CD is effectively a “best of” collection of great Canadian Brass music titles. The Band Canadian Brass gathered their friends and colleagues around them in the MacMillan Theatre of the University of Toronto to create this disc. Toronto is known for fine wind players and many of the participants performing alongside the brass are onetime students of Brass. In fact, the music was conducted by one of Daellenbach’s former students, Dr. Cameron Walter. Titles included are: Just a Closer Walk with Thee • Little Fugue in G Minor • Canzona per Sonare No. 4 • La Virgen de la Macarena • Beale Street Blues • Pachelbel's Canon • Fantasies for Anna (Musette in D Minor; Minuet in G Major; Minuet in D Minor; March) • That's a Plenty • Jesu, Joy of Man's Desiring • Suite from the Water Music (Allegro; Air; Hornpipe; Allegro Maestro) • Red, White and Brass • Bill Bailey • Nearer My God to Thee • Tuba Tiger Rag • The Saints' Hallelujah.