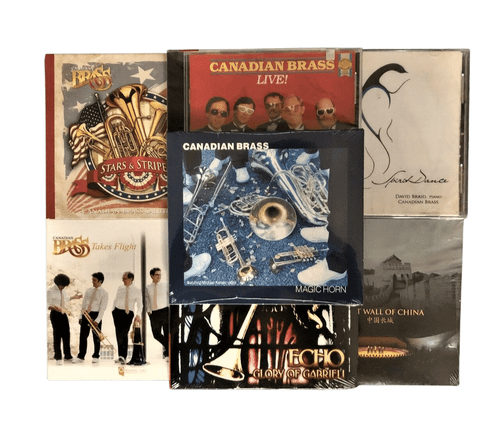 This wonderful mix of recordings shows the many different genres of music that Canadian Brass has impacted.  The CD's included in this bundle are:

STARS & STRIPES - This recording features the world’s most famous and top-selling brass ensemble in a rousing selection of works including Stars and Stripes Forever, America the Beautiful, Battle Hymn of the Republic, Hail Columbia, Shenandoah and You’re A Grand Old Flag. Military Might features the official hymns of the five branches of the military – US Army, US Navy, US Air Force, US Coast Guard and the US Marine Corps. Additional highlights include two versions of the National Anthem – the classic version as well as an original 1814 version – a unique opportunity to hear the development of our nation’s song. Plus, O Canada, a musical gift to the Brass’s American friends! For “Stars & Stripes” they are joined by a battery of thrilling percussion featuring members of Nexus, the world renowned percussion ensemble. Performing on an unprecedented array of rope field drums, snare drums, bass drums and cymbals are Bob Becker, Russell Hartenberger, Ryan Scott and Robin Engelman. Musical arrangements are by Howard Cable,Brandon Ridenour, Christopher Coletti and David Martin. All titles include; Stars and Stripes Forever; Military Might - Five Military Branch Anthems; The Star Spangled Banner (1814 Baltimore); Chester; A George M. Cohan Salute; The Battle Hymn of the Republic; When Johnny Comes Marching Home; Shenandoah; National Emblem; Dixie's Land; Hail Columbia; The Star Spangled Banner; America the Beautiful; My Country, 'Tis of Thee; Drums of Liberty; O Canada (A gift to Americans).

GREAT WALL OF CHINA - In 1977, as China emerged from the Cultural Revolution, Canadian Brass arrived in Beijing for a concert tour that was part of a cultural exchange. They were the first Western musicians to visit the country since Western music & art were banned in May 1966. The experience was the inspiration for this album that features the world famous ensemble performing arrangements of some of China’s most popular songs. Titles include: Lift Your Veil; Purple Bamboo Melody; The Moon Represents My Heart; Dance of Youth; Little Swallow; The Shepherd Girl; Moonlight Night on The Spring River; Tibetan Plateau; Catching Butterflies While Picking Tea; Nan Ni Wan; Raise Your Veil; Childhood; Gongxi Gongxi Ni (Congratulations); Limpid Eyes of A Fair Lady; Youth Dance; Colourful Clouds Chasing The Moon; Song of The Guerrillas and Mo Li Hua (Jasmine Flower).

TAKES FLIGHT - The Brass is well polished and absolutely brilliant. "Playing with the freedom they haven't had in years, the Brass is well polished and absolutely brilliant. Sonically alone, this cd is worth the price of admission. When you add the playing, fuggedaboudit (in a good way)!!! Simply a smoking classical crossover date that is first call/top shelf throughout. A must for all light classical ears that are tuned to serious music." Titles include: Flight of the bumblebee; Killer Tango; Fugue in G Minor; Come againe, sweet love; Galliard battaglia à 5; Golyardes' Grounde; La Cumparsita; Rondo alla turca; Lament; Chorale Preludes (11) for Organ, Op. 122: no 10; Canzoni et sonate (21): Canzon I a 5; Suite for Orchestra no 3 in D major; Quintet by Kamen; Carnival of Venice; Saints Hallelujah; Tuba Tiger Rag and Just a Closer Walk.

SPIRIT DANCE - Canadian Brass reach deeper into the world of traditional and experimental jazz by asking multi-Juno award winner David Braid to write and perform on a CD with them. Canadian Brass has had the good fortune to not only share in the greatest art music the West has produced, but by virtue of the enormous flexibility and sound qualities of their modern brass instruments the ensemble has been a welcome participant in the North American jazz tradition.  The group's early experimentation with Ragtime was followed with a prize winning & chart topping Jazz Crossover album, "Unexplored Territory" written for them by Don Gillis, a writer best known for his collaboration with Jim Henson on Fragel Rock with the Muppets. Songs included: 1. Interior Castles 2. Temple Heaven Walk 3. Prelude for Two Voices 4. Resolute Bay (Part 1) 5. Resolute Bay (Part 2) 6. Spirit Dance 7. Analusia 8. Wash Away 9. Yesterdays (Theme and Variations)

Private Investigations - The Best of Dire Straits and Mark Knopfler

Sultan's of Swing - The Very Best of Dire Straits