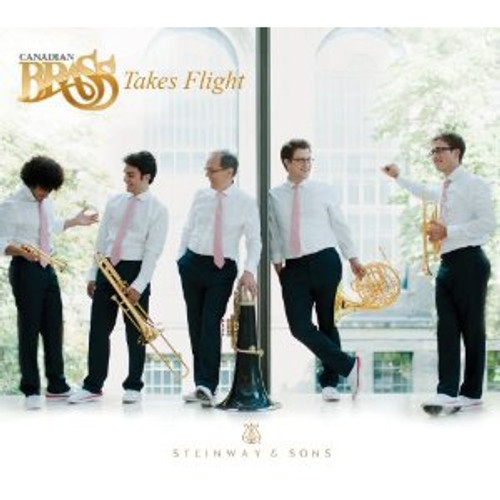 This CD of the Canadian Brass is a cooperative venture for the Opening Day Entertainment Label and the Steinway & Sons label and first recording with all of the new permanent members of the ensemble: Charles Daellenbach (tuba), Chris Coletti and Brandon Ridenour (trumpets), Achilles Liarmakopoulos (trombone) and Eric Reed (horn). This is the first recording the Canadian Brass have made with their new custom-made gold-plated instruments built by Conn-Selmer. The repertoire features favorite encores, new arrangements, and world premieres. As with their other recent releases, this disc is an audiophile sonic blockbuster, produced by Dixon Van Winkle and MB Daellenbach. After 40 years, the “Brass” have maintained a remarkable consistency in their style and virtuosity, even as the individual members have gradually changed. The current makeup of the ensemble includes founding member, Chuck Daellenbach on tuba and the latest addition, Achilles Liarmakopoulos on trombone, replacing the recently retired founding member, Eugene Watts. R E V I E W S: Steinway's first non-piano classical release is a humdinger. The Brass is well polished and absolutely brilliant. "Steinway's first non-piano classical release is a humdinger. Playing with the freedom they haven't had in years, the Brass is well polished and absolutely brilliant. Sonically alone, this cd is worth the price of admission. When you add the playing, fuggedaboudit (in a good way)!!! Simply a smoking classical crossover date that is first call/top shelf throughout. A must for all light classical ears that are tuned to serious music." – Midwest Record The Canadian Brass give us a wide variety of music on this, their latest release on the Steinway & Sons label. All of the music is delivered pitch perfect and graced with highly polished musicianship. The album has enough variety for everyone from casual listener to total brass aficionado. The booklet tells us that this is the first Canadian Brass recording with the new permanent members of the ensemble and also their first recording made with new custom-made 24K gold-plated instruments built by the Conn-Selmer company, and what beautiful sounding instruments they are! This overall golden sound is what is first noticed even before the impressive musicianship. The brass sound often becomes a sensual experience. The repertoire features favorite encores, new arrangements, and world premieres. Here are some highlights. Sonny Kompanek, known for his score to “The Big Lebowski” and many other films, composed the “Killer Tango” which combines a mood of Latin suave with a bit of Hollywood. The warm ensemble playing achieves a lyrical mellowness approaching the lush fullness of a string orchestra. If there’s a brass ensemble there must be Bach organ arrangements, and the Bach pieces, which include the Little Fugue in G Minor BWV 578, Fantasia & Fugue in D Minor BWV 905 and the ever-popular “Air on the G String” are superbly played with such individual purity of line that in addition to simply pleasant listening, this music could serve any student of counterpoint, as the timbre of each instrument clearly delineates every melodic line. The first arrangement on the album, Rimsky-Korsakov’s “Flight of the Bumble Bee” is the most eccentric, and one could also choose to listen to it last. Depending on what type of listener you are, your reaction might likely be delight, amusement or disorientation, or a combination of all three. The playing itself is incredible in terms of musicianship, phrasing and articulation. Amusingly, on a purely musical level, the arrangement itself is total kitsch, lacking any and all evocation of a bee or any insect in flight. Brass virtuosity is all there is and its fully on display here. On the other hand, both Dowland’s lovely lute song “Come Again, Sweet Love” as well as Scheidt’s echo-filled and more rapid “Galliard Battaglia” have a calm dignity that make these pieces sound as if both were originally written for brass instruments instead of voices. Probably because both were originally vocal works, these pieces sing as well as shine. On the lighter side, the witty arrangement by Arthur Frackenpohl of Mozart’s “Turkish Rondo” is a welcome contrast. Most people have heard “La Cumparsita” by Gerardo Matos Rodríguez without knowing the title or the composer. (If you’ve seen the classic film Some Like It Hot, it’s the tango Jack Lemon and Joe E. Brown dance to.) Another Kompanek arrangement, this one has a swerving, comical swagger. After many other adventures, including Michael Kamen’s gorgeous Quintet, just 4 minutes long, and the outdoor park-band style of melodic ornaments and acrobatics in “Carnival in Venice,” the album ends with a stately but not so sad New Orleans funeral march, slow to the cemetery and joyful on return. All of this music, from Renaissance to New Orleans, is heard through the style of the Canadian Brass rather than trying to match the performance practices of past eras. This is analogous to a modern pianist who might play a variety of Baroque works written before the piano was invented yet adapted to the modern keyboard sound. Here the music is interpreted on gorgeous brass instruments by an award-winning ensemble with a characteristic sound. There are many albums on which to hear this music in its original form, so enjoy the thrilling brass as there are many more surprises in store. Recommended to anyone who admires good musicianship, beautiful sound quality, and a brass ensemble ranging from piccolo-trumpet through horn to tuba. – Greg La Traille, ArkivMusic.com

1.  Tale of Tsar Saltan: Suite, Op. 57 - Flight of the bumblebee by Nikolai Rimsky-Korsakov