Jeroen Berwaerts - In the Limelight , Romantic Music for Trumpet and Piano 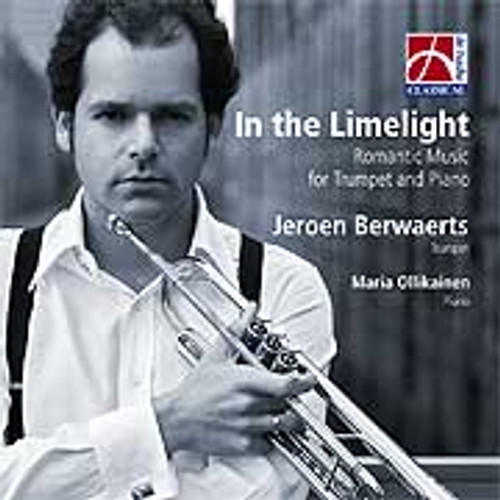 Jeroen Berwaerts - In the Limelight , Romantic Music for Trumpet and Piano

Belgian trumpeter Jeroen Berwaerts is a paramount musical force with an all-inclusive love for music that knows not how to discriminate. Praised for his outstanding technical capabilities and sensitive musicality, his repertoire encompasses every epoch, from baroque music to contemporary music to jazz. With a flourishing solo career of recitals as well as concerts with the world's leading symphony orchestras, Jeroen Berwaerts still finds time to devote himself to chamber music.

Born in 1975, Jeroen Berwaerts' musical talents had already been awarded with prizes from various competitions such as the Concours Maurice André (1991) and Concours Européen de Jeunes Trompettistes (1992) when he began studies in Karlsruhe with celebrated trumpet-virtuoso Reinhold Friedrich. He was also an award-winner at the Prague Spring International Music Competition in 1997 and won the 2nd grand prize as well as the "Prix Feeling" (a special prize for best interpretation) at the Maurice André Trumpet Competition.

Jeroen Berwaerts' open-mindedness and resplendent playing have brought him invitations to play at internationally acclaimed music festivals, including Ars Musica in Belgium, Takefu International Music Festival and the Rheingau Music Festival, as well as frequently at the Schleswig-Holstein Music Festival where in 2005 he performed the world premiere of Toshio Hosokawa's Voyage VII for trumpet and ensemble. He has also performed as a soloist with many well-renowned orchestras including the Jeunesses Musicales World Orchestra, Munich Symphony Orchestra, Berlin Symphony Orchestra, NDR Radiophilharmonie Hanover and the Symfonieorkest Vlaanderen under conductors such as Alan Gilbert and Yakov Kreizberg. Since winning the position of Principal Trumpet of the NDR Radio Symphony Hamburg in 1999, he has been invited to appear on several occasions as soloist with the orchestra.

Following many years as a member of the Canadian Brass, Jeroen Berwaerts now plays with the Stockholm Chamber Brass. Over thirty compositions have been written for the ensemble, which performs mostly original compositions or arrangements of both contemporary and more traditional repertoire.

Amidst his burgeoning trumpet career, Jeroen Berwaerts completed Jazz vocal studies at the Royal Conservatory of Ghent. He has developed several programs for trumpet and piano where he uniquely combines classical, jazz, trumpet and voice.

His first solo CD In the Limelight provides a stunning take on trumpet repertoire of the Romantic period. RCA also released a live-CD featuring the Posthornserenade by Mozart under the baton of Günther Wand. Since 2008, Jeroen Berwaerts has been a Professor of Trumpet at the Hochschule für Musik in Hanover.

Canzona per Sonare No. 2 for Trumpet Quartet (Gabrieli/arr. Klages)

Canzona per Sonare No. 2 for Trumpet Quartet PDF Download by Gabrieli/Klages

AN EVENING OF BRASS THEATRE CD