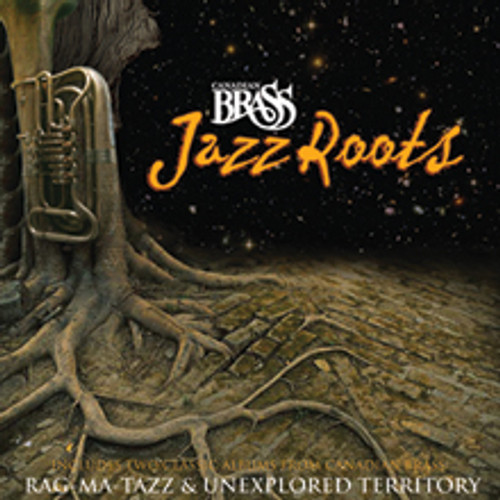 Never thought you would hear Canadian Brass joined by jazz piano? How about electric bass? Unknown to many, it's already been done! In the early 1970s, the Brass challenged the perception of musical boundaries through two recordings which were among the first to create the brand-new "crossover" genre. These classic LPs, Rag-Ma-Tazz, which was influenced by the ragtime era, and Unexplored Territory, a unique collaboration with contemporary jazz pianist and composer Don Gillis, are presented here for the first time in one CD package, as a homage to the story of jazz. -First came Rag-Ma-Tazz—a ragtime era and ragtime influenced music recording. The first eight ragtime pieces are classic Scott Joplin, the king of ragtime composers. Composers all over the world were well aware of the American ragtime craze, resulting in a plethora of jazz influenced compositions, from Claude Debussy to two Canadian composers who added their musical view of the era in their original composition for the Brass: film composer Larry Crosley and dean of Canadian composers Eldon Rathburn.

In 1977, Unexplored Territory became the first runaway best seller for Canadian Brass. Stereo Review featured this recording as its pick of the month, suggesting, “The Canadian Brass enters its golden age.” Never before had there been such a successful collaboration between a classical artist with a jazz ensemble. This recording was a result of the unique professional collaboration of the Brass with pianist-composer Don Gillis, a writer who went on to become the music director for Muppets’ creator Jim Henson. Gillis brought his own jazz quartet to the recording project, along with names that have become a who’s-who of Canadian artists, including the “First Lady of the Guitar” Liona Boyd. Significantly, Unexplored Territory also features the first appearance of the Brass’ signature tune “Just a Closer Walk”!

The Brass is pleased to make this classic material available, and hope you'll share your impressions through [email protected] You can place an advance order for this two-disc CD here! CONTENTS:

Classics To Jazz Highlights with CD