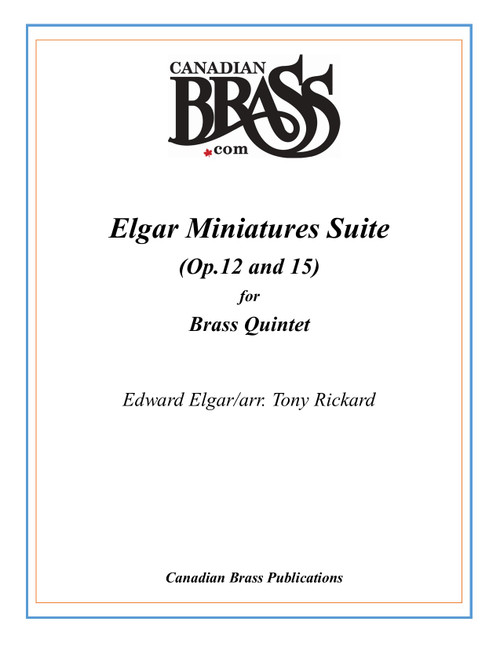 This suite of musical pieces from composer Edward Elgar allows your ensemble to feature soloists for cornet, horn and Trombone or Euphonium with a few different options on the arrangements.  Included are Salut d'Amour (Horn or Trombone/Euphonium feature),  Chanson de Nuit (Horn or Trombone feature) and Chanson de Matin (Cornet or Trumpet feature). Arranger Tony Rickard has prepared some background on the Suite below.

Salut d’ Amour was the first published composition by Edward Elgar (1857-1934). In Summer of 1 888, Elgar planned to holiday in the Yorkshire town of Settle with long-standing friend, Dr. Charles Buck. On his departure, he received from his companion Alice Roberts, a poem entitled Love’s Grace. While on holiday, Elgar reciprocated by composing a short piece which he titled Liebesgruss (Love’s Greeting), and on his return he presented the work to her together with a subsequently successful marriage proposal.

Liebesgruss (Love’s Greeting) was submitted for publication late in 1888 to Schott & Co of London in three versions – for solo piano, violin and piano, and orchestra. Sales of the work remained slow until the publisher, with the composer’s approval, retitled the work Salut d’ Amour in the hope that the French title might garner more international interest. To their satisfaction it did, although this did not financially benefit Elgar who had sold the rights of the work to Schott for the sum of two guineas.

During 1897, Elgar first became acquainted with A J Jaeger (an editor at London based music publisher Novello founded in 1811 ), later to become Nimrod of the Enigma Variations. Elgar wrote to Jaeger in October of that year bemoaning the lack of financial reward he had received for his works. Within ten days of his letter to Jaeger, Elgar sent to Novello a short piece for violin and piano which he called Evensong, although he suggested to Novello's that they might prefer the name Vespers. In the event, believing that French titles sold better, they published it that year as Chanson de Nuit.

The original violin and piano versions of Chanson de Nuit and companion piece Chanson de Matin which formed Elgar’s Op. 15, would most certainly have been aimed at the amateur parlour, where salon music was a much in vogue and potentially lucrative genre. However Elgar’s chamber orchestrations of the two pieces in 1901 (both premièred on September 14th in the Promenade concerts at Queens Hall, London, conducted by Sir Henry Wood) remain the form in which the pieces are usually heard today.

It's The Most Wonderful Time of the Year Brass Quintet (Pola & Wyle/arr. Hudson) PDF Download