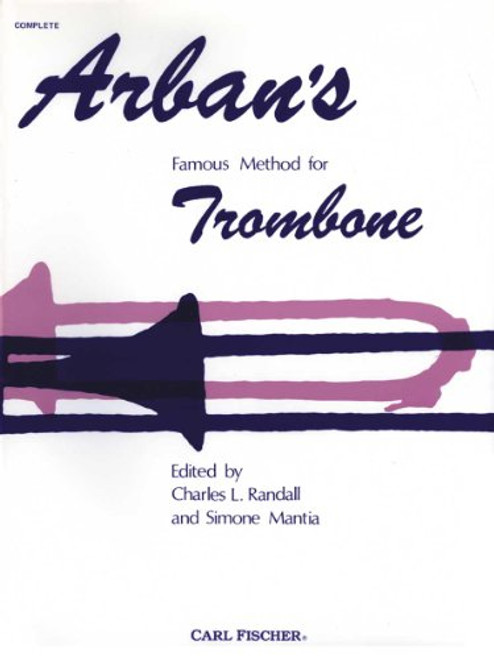 Since 1936, the complete Arban’s Famous Method For Trombone has set a standard of excellence for slide, valve and baritone trombone method books. The etudes, lessons and commentaries within the over 200 pages of this impressive tome teach the trombone student intonation, agility, and musicianship. No music library for the aspiring trombonist is complete without this edition of one of the most popular method books for trombone ever written.

This illustrious artist was born in Lyons, France, February 28,1825, and after his initial studies on the Trumpet under Dauverne, developed into the most brilliant Cornet virtuoso and pedagog of his time. His astonishing performances and triumphant concert tours throughout Europe were the means of establishing the Valve Cornet as one of the most popular of all musical instruments, and raising it to a superior degree of significance never before attained.

Arban's artistic ideals, his sound musicianship, and invaluable instructive principles were perpetuated in his splendid "Method for the Cornet", which has maintained the very highest position among similar instructive works.

Its practical superiority, as well as artistic plan, has never been surpassed and as proven by the present new transposed edition, its fundamental pedagogic principles are as adaptable and serviceable for other brass instruments as the one for which it was originally conceived.

Ewald Quintet No. 1 (edited by Rickard)

36 Studies for Trombone by O. Blume (edited by Reginald Fink)

36 Studies for Trombone by O. Blume (edited by Reginald Fink)

Canzona per Sonare No. 2 for Trumpet Quartet (Gabrieli/arr. Klages)

Lip Flexibilities (for all brass instruments) by Bai Lin