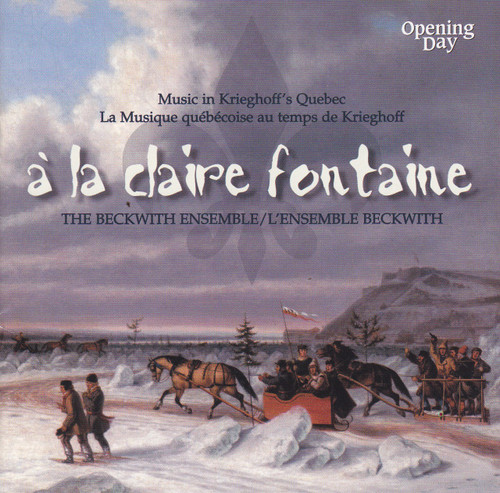 The music on this disc was prepared in 1999 on the occasion of the exhibition "Images of Canada," a large-scale retrospective of one of the outstanding painters of 19th-century Canada, Cornelius Krieghoff. The exhibition, led by Dennis Reid, was scheduled for five major Canadian galleries during 2000 and 2001. The program was first presented at the Art Gallery of Ontario in January 2000 as an initiative of Music Canada 2000. It aims to evoke musical lines and tone colors appropriate to Krieghoff's paintings: sleigh bells, the modest-sized organ or harmonium of the Quebec village church, the infectious fiddle tunes of social gatherings, and traditional songs of both settlers and natives. Whether or not Krieghoff made contact with composers during his years in Montreal and Quebec City, their work reveals a number of parallels to his.

Krieghoff's period saw a remarkable growth of interest in the preservation of Quebec folksongs, first in manuscript collections such as those of Edward Ermatinger and Thomas-Étienne Hamel, and then in Ernest Gagnon's historic publication Chansons populaires du Canada (1865). J'ai trop grand peur des loups and À la claire fontaine are both chansons en Iaisse — leisurely songs in many stanzas where the last line of one becomes the first of the next. The repetitions in "J'ai trop grand ..." are retained here, while those in "À la claire..." are not. Gagnon places the latter first among the one hundred songs in his collection, remarking in his notes that everyone knows and sings it: "On n'est pas Canadien sans cela."

A composer and organist as well as a musical folklorist, Gagnon included in his volume a local variant of the song "Malborough s'en va-t-en guerre," with a quasi-Indian refrain, "Tenaouiche Tenaga." He also composed "Stadaconé," a danse sauvage reflecting in his cultivated fashion the music heard on reserves near Quebec City, in much the same way Krieghoff portrayed first-nations culture in works such as Indians Dancing. Reflective of native issues rather than close observation of the native lifestyle is Lavallée's operetta TIQ: settled at last. The title is an acronym for "The Indian Question," and the plot centers around the mid-19th-century struggles between the Plains Indians and the U. S. authorities.

Along with the increased awareness of the folksong heritage went an increased use of these tunes by com posers and arrangers. Perrault's Christmas mass interweaves phrases from several traditional Quebec carols, and Gagnon published simple choral arrangements of some of the traditional cantiques, thus giving them wider popular circulation. The hymnbook of francophone Protestants, Laurent-Éduard Rivard's Chants évangéliques, contains several original tunes by the compiler.

The Krieghoff exhibition features the figure of a rural fiddler in at least six paintings. The Quebec fiddle-tune repertoire includes Scottish and Irish melodies but also several which are unique to Quebec, among them the "reel du pendu," or "reel of the hanged man." The recordings of early-twentieth-century performers are a guide to this aural tradition, and were used by David Greenberg in preparing the versions heard here. The performer's intricate foot-tapping or an assisting keyboard, illustrates typical accompaniments. Dancing was one of the most popular social pastimes, depicted in some of Krieghoff's best-known works: one thinks of Merrymaking, After the ball, and others. Our selection of various dance types of the time suggests the sounds that accompanied these scenes.

The little "New Year's Waltz," the earliest known Canadian composition for solo flute, appeared as a supplement to a Montreal literary newspaper, to which Susanna Moodie was a frequent contributor — and it is in fact dedicated to her. The tune may form a modest echo of Krieghoff's New Year's Day Parade. There is no flutist in that scene, but a bugler or cornet-player may be discerned. Dessane, a French-immigrant organist and composer who had studied with Cherubini, became touched by the "folksong craze," and composed a set of quadrilles based on some of the best- loved tunes (among them "Vive la Canadienne," "A la claire fontaine," and "En roulant ma boule"). Jean-Chrysostome Brauneis II was the son of a Belgian musician-immigrant; his march for the festival of Quebec's patron saint, John the Baptist, was a timely addition to the 19th-century patriotic movement directed by the Société St. Jean-Baptiste. Lavallée's piano-solo galop and the polka of the Montreal composer-publisher Henri Prince (a.k.a. Henry Prince) represent sophisticated performer-music based on dance models, rather than actual ballroom music.

Similarly sophisticated in relation to the folksong repertoire were the many settings of genre poetry or love verses by Quebec composers. These "art songs" sometimes dealt with local subjects, as has the melodramatic lament of the mother whose son has enlisted in the defense of Quebec, under threat during the U. S. Civil War, or Lavigueur's music-and-words portrait of a young Huron girl. The latter, a collaboration of Lavigueur with Pierre-Gabriel Huot, became one of biggest song-successes of the day (Krieghoff's portraits of native women come to mind). Both words and music of "Écho malin" are by Emmanuel Blain de Saint-Aubin; the published piano-vocal setting is credited to Dessane. Saint- Aubin was also the lyricist of Dessane's "La Mère canadienne." Sabatier's "L'Alouette" is based not on the familiar folksong but on a contemporary poem by Octave Crémazie.

Mid-century Montreal and Quebec City offered regular productions of musical theatre by both local and touring troupes. The operettas of the most celebrated composer of the period, Calixa Lavallée, were written however to English-language texts during his years in the United States, and were not produced in Canada until their revivals in the nineteen-sixties. The Widow is escapist entertainment on a Ruritanian theme, with music of verve, charm, and melodic invention.

Nearly all the music we have selected is found in the anthology series The Canadian Musical Heritage/Le Patrimoine musical canadien, volumes 1, 2, 7, 10, 20, and 22. Consult the web site: http://www.cmhs.carleton.ca. For copies of the catalogue listing published volumes, sheet-music excerpts, and compact-disc recordings, write:

That's a Plenty for Brass Quintet and Concert Band