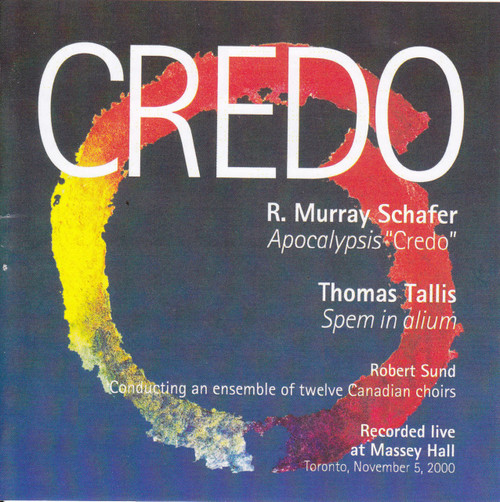 R. Murray Schafer has won national and international acclaim not only for his achievement as a composer but also as an educator, environmentalist, literary scholar, visual artist and provocateur. Through his unique explorations of the relationships between music, performer, audience and setting, he has expanded the potential and appreciation of music and its place in the arts and culture of our time. Many of his compositions and writings stand as landmarks in the evolution of music and its communication in the twentieth century. Born in Sarnia in 1933, he was raised in Toronto where he studied at the Royal Conservatory of Music and briefly at the University of Toronto. He pursued autodidactic studies in literature and journalism while travelling in Austria, Italy and Britain. He has long been recognized as having a special flair for choral composition and has composed over 100 musical works. Many of these have an environment and/or dramatic character offering opportunities for greater audience participation and awareness — both aurally and visually.

Two masterpieces — the contemporary multi-choir work Apocalypsis by R. Murray Schafer and the piece that inspired it — Spem in alium by Thomas Tallis form the album Credo. Credo presents 12 Canadian university choirs conducted by Swedish choral conductor Robert Sund, in a rendering of two masterpieces written hundreds of years apart. The modern Canadian master, R. Murray Schafer, took his inspiration in part from his sixteenth-century British predecessor. The two works make for a program of spiritual depth and contrasting styles.

Credo forms part of Apocalypsis (1978) a dramatic work for multiple choirs depicting the destruction of the world and the creation of the New Jerusalem as depicted in the books of the Bible. In contrast to part one, which is very active, Credo consists of motion within tranquility. Its twelve mixed choirs are named after the 12 precious stones forming the foundation of the New Jerusalem: jasper, sapphire, agate, emerald, onyx, sardius, chrysolite, beryl, topaz, chrysoprasus, jacinth and amethyst. The choirs are supported by an instrumental ensemble of eight double basses and synthesizer. Credo consists of twelve invocations and responses on a plan of twelve note durations through the twelve keys of the harmonic system (C, C#, D, etc.). The basic scale consists of six notes, which are subject at times to chromatic alteration. The note order of the invocations is reversed in the responses. The work shows a gradual increase in intensity and complexity from the unison line of the opening phrase to 48-part counterpoint at the close. The text of Credo is the composer’s adaptation of a text by medieval philosopher Giordano Bruno.

Sean Kelly : Where the Wood Meets the Wire CD