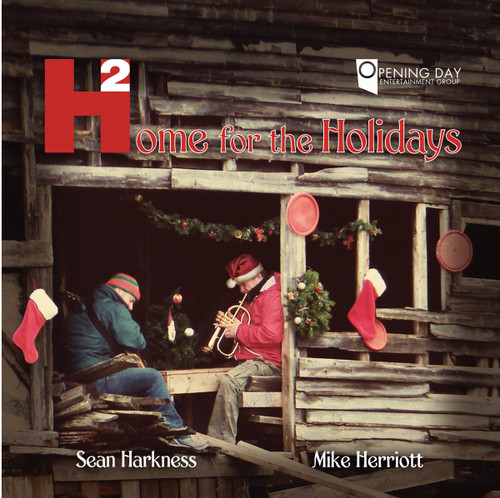 Time-honoured music associated with the holiday season has the magical ability to transport listeners beyond their thoughts…into a world of reminiscence, nostalgia, feeling and emotion. H2-Home for the Holdays does just that! H2 bring their cool sound and jazzy riffs home for the holiday in an album of classic Christmas songs creating a jazz-filled wonderland gift-wrapped in the bright colors of the season.

Brimming with thirteen all-time favorites including Angels We Have Heard on High, Carol of the Bells, O Tannenbaum, Silent Night, God Rest Ye Merry Gentlemen, Meditation on Lo How a Rose, We Three Kings, Hark! The Herald Angels Sing, It Came Upon a Midnight Clear, Home for the Holidays and Christmas Time is Here, from the classic TV special A Charlie Brown Christmas, which has become one of the most recognizable “jazz” oriented holiday tunes of all-time. Each of these tracks sparkles with imagination that flows with a musical rapport pushing each along, bringing something new and fresh to these well-known and popular holiday hits.

Mike is a respected multi-instrumentalist in both the classical and jazz genres who is in demand as a lead trumpeter, jazz improviser, orchestral soloist, touring Broadway musician, arranger and composer. He has appeared with a host of jazz greats, including Maynard Ferguson, Slide Hampton, Phil Nimmons, Maria Schneider and more. His recording career is diverse, including CDs, soundtracks and television.

Sean Harkness is an award winning, first-call guitarist in New York City and can be seen performing at any one of the city's historic and world-famous jazz clubs on a regular basis. With five releases under his belt, he was originally signed by Windham Hill Records as a solo artist where he released his first album, Aloft, to great acclaim. He has toured the world, most notably Japan & Europe, as a sideman and is also a well-respected Broadway musician.

This H2 CD is their second release on Canada’s Opening Day Entertainment label.

Click on the above Product Video tab for a listening sample.

Sean Kelly : Where the Wood Meets the Wire CD