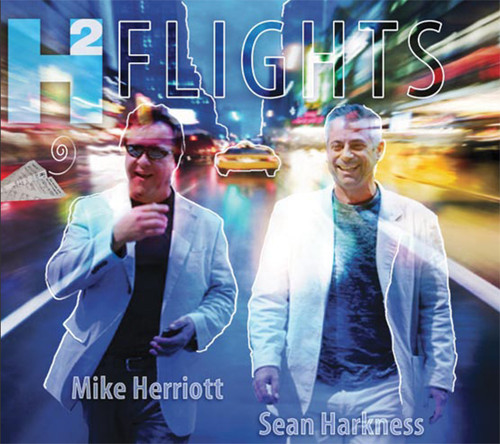 Flights is an album of original compositions and jazz explorations of new ideas combining Sean’s guitar and Mike’s flugelhorn. Each bringing their own material to the studio, they also invited a few friends to join their duo on five of the tracks. They are assisted by Mark Miller, trombone; Jim Vivian, bass and Kevin Coady on drums. This is the first of many collaborations between Harkness & Herriott aka H2.

The tracks are diverse and include the bouncy Spring Break and the hauntingly beautiful Leap Year, a melodic tryst entitled Myffed featuring Mike Herriott’s incredible facility on flugel. Hedge Your Bets, is a stunning tune with delicate harmonics ringing from the guitar of Sean Harkness while the final tack Hammock Time, offers an easy relaxing tuneful conclusion.  There are ten tracks overall. The ensemble is tight and full of diverse moments with grooves that go miles deep. The tracks allow each to show off their talents and create a musical rapport that pushes each along as they weave a tapestry of infectious melody.

Canadian trumpeter, Mike Herriott, a respected multi-instrumentalist in both the classical and jazz genres, is in demand as a lead trumpeter, jazz improviser, orchestral soloist, bassist, arranger and composer. He has appeared as a trumpet soloist with orchestras across Canada as well shared the stage with as a host of jazz greats, including Maynard Ferguson, Slide Hampton, Phil Nimmons, Maria Schneider and more. His recording career is diverse, including CDs, soundtracks and television.

Sean Harkness attended Boston’s Berklee College of Music and after launching his career was eventually signed by Windham Hill Records as a solo artist where he recorded his first album, Aloft. He has toured the world, most notably Japan & Europe, as a sideman as well as Broadway musician and has also recorded solo projects including a CD with saxophonist Eric Knight.