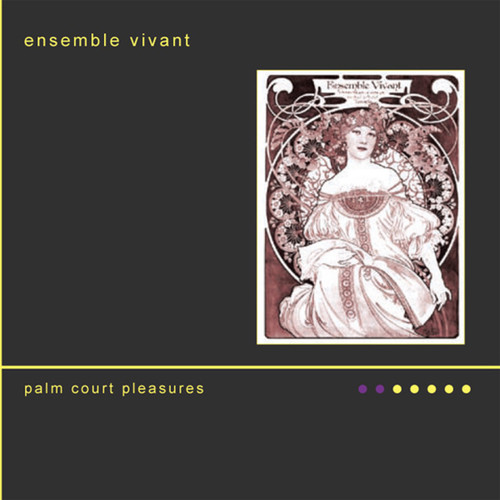 The group’s center is pianist Catherine Wilson. Repeatedly honored for her exceptional artistry and sensitive musicality, virtuoso pianist she is one of this generation’s most interesting and innovative classical instrumentalists. She has won the hearts of fans and critics alike with inspired, soulful interpretations. Her renditions of Chopin (described as “exquisite” by the Toronto Star) have been compared to the great Arthur Rubinstein. Ms. Wilson made her triumphant debut at Carnegie Hall in New York City in 2005 at the invitation of Maestro Skitch Henderson and the New York Pops where she performed the Leroy Anderson Piano Concerto.

Palm Court Pleasures is Ensemble Vivant’s debut recording which literally put the group on the map and created a sensation. From their inception Ensemble Vivant has had a love for diverse music ranging from classical to ragtime. The album includes classical standards — Arrival of the Queen of Sheba by Handel, Waltz in A-flat Major, Op. 69, No. 1 by Chopin and Hungarian Dance No. 5 by Brahms — but also great ragtime — Bethena Waltz and Elite Syncopations by Scott Joplin as well as songs from the stage — Someone to Watch Over Me by George Gershwin and I’ll See You Again by Noel Coward.