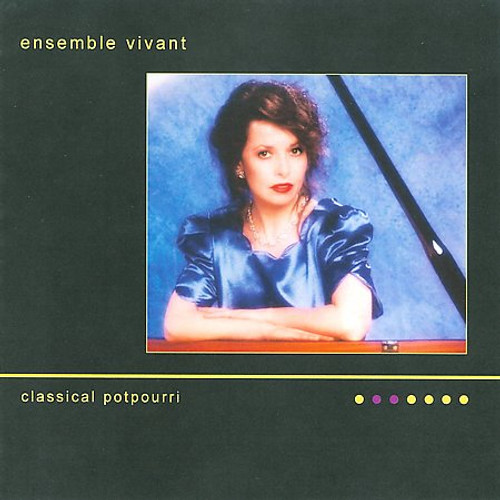 The group’s center is pianist Catherine Wilson. Repeatedly honored for her exceptional artistry and sensitive musicality, virtuoso pianist she is one of this generation’s most interesting and innovative classical instrumentalists. She has won the hearts of fans and critics alike with inspired, soulful interpretations. Her renditions of Chopin (described as “exquisite” by the Toronto Star) have been compared to the great Artur Rubinstein. Ms. Wilson made her triumphant debut at Carnegie Hall in New York City in 2005 at the invitation of Maestro Skitch Henderson and the New York Pops where she performed the Leroy Anderson Piano Concerto.

The repertoire performed on Classical Potpourri showcases the Ensemble Vivant’s diverse repertoire, which merges their classical roots and jazz genres. The CD includes an original composition by Catherine Wilson entitled Knollwood Place. Other works include an arrangement of Bach’s Preludium from Cantata, BWV29 and the famous Largo from the Keyboard Concerto No. 5 in F minor. The album covers an assortment of musical styles and emotions — from Chopin’s delicate Berceuse and Ravel’s Pavane for a Dead Princess to a rollicking Maple Leaf Rag by Scott Joplin and the spirited Ritual Fire Dance by Manuel de Falla. Also included are works by Satie, Gershwin, Leroy Anderson, Kreisler, Puccini, Beethoven and Elgar.