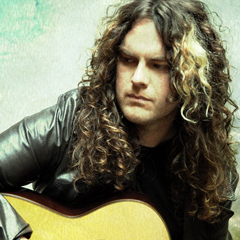 A native of North Bay, Ontario, Sean Kelly's guitar speaks in many tongues, and to many people. This is evident In his successful Solo Guitar career, his current role as lead guitarist with Grammy-winning superstar Nelly Furtado, to touring, writing, or recording with such artists as Gilby Carke (ex Guns N Roses), Helix, Carole Pope, and his own 70's inspired rock outfit Crash Kelly (named for Sean's real-life Uncle who got that nickname as a rough and tough minor league hockey player!).

Trained in classical guitar, Sean creates a warm and intimate sound in "The #1 Classical Guitar Album",  a mainstay in the Canadian Classical Charts.

His "Christmas Guitar" album has been a Top 10 Billboard hit in the US. The addition of percussion, harp, keyboard and more creates a very festive and friendly must for every home.

Sean has toured the world a few times over. Selected as a Top 10 Finalist in Guitar Player Magazine's Guitar Hero 2005 event, Sean received high praise for his playing from such greats as Joe Satriani and Steve Lukather. He is at home on any stage, be it a sweaty rock n roll club, an intimate theatre setting, or a packed stadium.

Sean has proved himself to be an inventive, respected songwriter, having collaborated with such artists as Helix, Gilby Clarke, Moe Berg (TPOH), Alan Frew (Glass Tiger), Dale Martindale (Images In Vogue), Dean Lickyer, and others. He has produced a number of records, including his co-production work on Helix's 2009 comeback album Vagabond Bones (Fontana/Universal) and 2011's Smash Hits...Unplugged! (EMI), Christmas Guitar with producer, James Robertson  and his latest CD, Where the Wood Meets the Wire" with Canadian producer and friend, Craig McConnell.

Where The Wood Meets The Wire is a true crossover affair that re-imagines what a classical guitar album can be. In the spirit of breaking down barriers, Sean takes much loved traditional Classical repertoire and brings a decidedly modern production approach to the affair. "This is the album where I feel all of my influences are coming together in a very organic way,"  Sean shares, "it's all about finding fresh inspiration in this timeless music, and re-interpreting it with a new voice".

Sean Kelly will be hitting the road in 2011/2012 to support Where The Wood Meets The Wire, bringing with him a world class live band and a show that marries the world's greatest Classical guitar music with a presence honed from his experience on the world's stage.