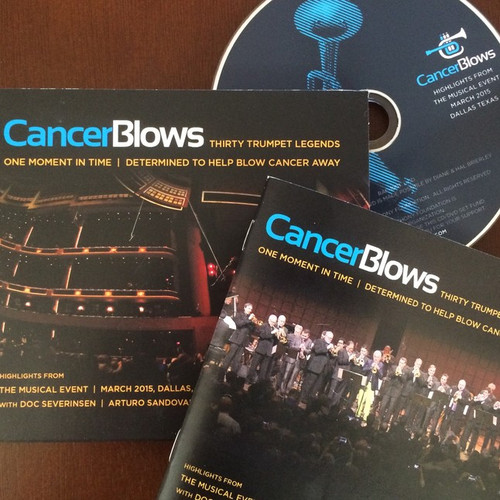 This is a MUST HAVE for trumpet players. Included is a CD/DVD Combo Pack featuring highlights from the March 4th, 2015 CancerBlows concert in Dallas, TX and bonus footage from the Monday, March 2nd concert. Performers include Doc Severinsen, Arturo Sandoval, Lee Loughnane of Chicago, Ryan Anthony, former Canadian Brass members and many more all backed by members of the Dallas Symphony Orchestra and UNT's One O'Clock Lab Band. Songs include What A Wonderful World, A New Carnival of Venice, Pines of Rome, Funky Cha Cha, Well, Git It, Someone To Watch Over Me and Gabriel's Oboe.
Performers on the bonus footage include principal trumpets from major symphonies includes Chicago, Philadelphia, New York Philharmonic, Cleveland, Dallas, Houston and more.

A Night In Tunisia

A New Carnival Of Venice

Fanfare For An Angel

Gabriel's Oboe From "The Mission"

What A Wonderful World

You Don't Know What Love Is

Gabriel's Oboe From "The Mission"

What A Wonderful World

A New Carnival Of Venice

You Don't Know What Love Is

A Night In Tunisia

Someone To Watch Over Me