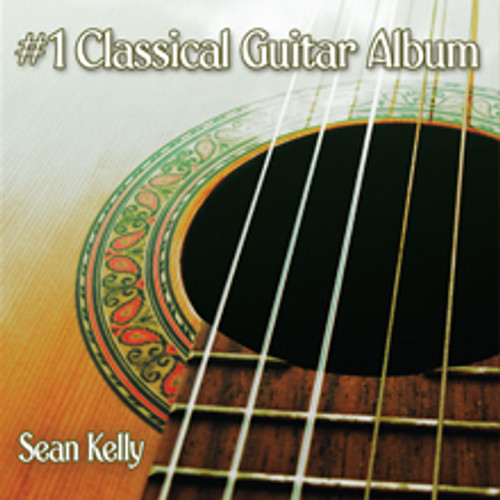 The #1 Classical Guitar Album features songs and works that inspired guitarist Sean Kelly. Nylon or steel, nickel plated or wound round, Sean Kelly has strummed many a guitar string. The native of North Bay Ontario had his first training in the classics and it is those roots that he returns to with the #1 Classical Guitar Album. Sean began his musical life studying classical guitar but also digging the sounds of rock — particularly Kiss, Van Halen and Guns N’ Roses. But he stayed with the classics and continued to practice and improve. Moving to Toronto, he studied at the University of Toronto, where he took lessons with virtuoso Eli Kassner, a man who was a direct link to modern classical guitar — Kassner was a student of the great Andrés Segovia. Kelly continued his musical journey with a number of rock bands and also began his teaching career — teaching vocals and guitar in the Toronto area. He soon started his own band — Crash Kelly, which released two albums, with the last one produced by Gilby Clarke of Guns N’ Roses. Crash Kelly has toured North America with Alice Cooper. Today Sean Kelly continues his career with recordings, concerts, sessions with many artists, composing jingles and touring as a side man.

The #1 Classical Guitar Album is a complete overview of the classical guitar. It features some of the earliest works for the guitar including the famous Romanza by an unknown anonymous composer. The work, also known as Romance Anónimo (Anonymous Romance), is a Spanish piece with its authorship currently in question. It has variously been attributed to Antonio Rubira, David del Castillo, Francisco Tárrega, Fernando Sor, Daniel Fortea, Miguel Llobet, Vicente Gómez and Narciso Yepes. Greensleeves by Henry VIII of England not only composed music but was famous for his many appetites. John Dowland was a singer of songs and composer who helped put the lute on the map while he roamed the English countryside. His music has been an inspiration to guitarist for generations. The album also includes works by Bach, with Bourée in E minor, BWV996 and Prelude in D, BWV1007. The Spanish composer Albéniz is represented with one of the most famous pieces for guitar ever written — the haunting and beautiful Asturias. More contemporary and popular works include Stanley Myers' Cavatina, which became known to audiences when it was featured in the Oscar® winning-film The Deer Hunter while Mason Williams smash hit Classical Gas reached number 2 on the Billboard Charts in 1968. It was a friendly a nod to classical music — bridging popular tastes and established performance practice.

Classical Duets for Violin with CD

Album for the Young